″In secondary school, a boy and a girl, both of them teenagers, both of them with the same amount of pocket money would go out and the boy would be expected always to pay, to prove his masculinity. And yet we wonder why boys are more likely to steal money from their parents. What if both boys and girls were raised not to link masculinity with money? What if the attitude was not, “The boy has to pay,” but rather, “Whoever has more, should pay.” Now, of course because of the historical advantage, it is mostly men who will have more today. But if we start raising children differently, then in fifty years, in a hundred  years, boys will no longer have the pressure of having to prove this masculinity.

But by far the worst thing we do to males, by making them feel that they have to be hard, is that we leave them with very fragile egos. The more “hard man” a man feels compelled to be, the weaker his ego is. And then we do a much greater disservice to girls because we raise them to cater to fragile egos of men. We teach girls to shrink themselves, to make themselves smaller. We say to girls, “You can have ambition, but not too much. You should aim to be successful, but not too successful, otherwise you would threaten the man. If you are the bread winner in your relationship with a man, you have to pretend that you’re not. Especially in public. Otherwise you will emasculate him.” But what if we question the premise itself? Why should a woman’s success be a threat to a man. What if we decide to simply dispose of that word, and I don’t think there is an English word I dislike more than, “emasculation.”

A Nigerian acquaintance once asked me if I was worried that men would be intimidated by me. I was not worried at all. In fact it had not occurred to me to be worried because a man who will be intimidated by me is exactly the kind of man I would have no interest in. But still I was really struck by this. Because I am female, I am expected to aspire to marriage. I am expected to make my life choices always keeping in mind that marriage is the most important. Now, marriage can be a good thing. It can be a source of joy and love and mutual support, but why do we teach girls to aspire to marriage and we don’t teach boys the same?

I know a woman who decided to sell her house because she didn’t want to intimidate a man who might marry her. I know an unmarried women in Nigeria who, when she goes to conferences, wears a wedding ring, because according to her, she wants all the participants in the conference to give her respect. I know young women who are under so much pressure from family, from friends, even from work to get married, and they’re pushed to make terrible choices. A woman at a certain age who is unmarried, our society teaches her to see it as a deep personal failure. And a man, after a certain age isn’t married, we just think he hasn’t come around to making his pick.

It’s easy for us to say, “Oh, but women can just say ‘no’ to all of this.” But the reality is more difficult and more complex. We are all social beings. We internalize ideas from our socialization. Even the language  we use in talking about marriage and relationships illustrates this. The language of marriage is often the language of ownership, rather than the language of partnership. We use the word “respect” to mean something a women shows a man, but not often something a man shows a woman”. Todo o discurso está aqui.

“We teach girls to shrink themselves
To make themselves smaller
We say to girls
“You can have ambition
But not too much
You should aim to be successful
But not too successful
Otherwise you will threaten the man”
Because I am female
I am expected to aspire to marriage
I am expected to make my life choices
Always keeping in mind that
Marriage is the most important
Now marriage can be a source of
Joy and love and mutual support
But why do we teach girls to aspire to marriage
And we don’t teach boys the same?
We raise girls to see each other as competitors
Not for jobs or for accomplishments
Which I think can be a good thing
But for the attention of men
We teach girls that they cannot be sexual beings
In the way that boys are
Feminist: the person who believes in the social
Political, and economic equality of the sexes” 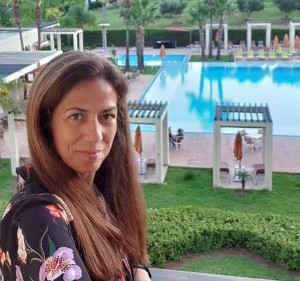 Analytical cookies are used to understand how visitors interact with the website. These cookies help provide information on metrics the number of visitors, bounce rate, traffic source, etc.

Advertisement cookies are used to provide visitors with relevant ads and marketing campaigns. These cookies track visitors across websites and collect information to provide customized ads.